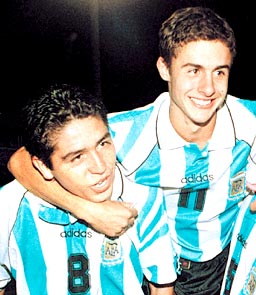 We’re skipping back to the 1997 U20 World Cup in Malaysia here, when England’s young’ns took on eventual winners Argentina in the Round of 16 and promptly had their sunburnt pink little arses handed to them by a side that included, among others, Pablo Aimar, Juan Roman Riquelme, Esteban Cambiasso and Walter Samuel (yes, he was under 20 years of age once upon a time – at least that’s what it says here).

By way of contrast, the likes of Aimar and Riquelme were forced to share a pitch with Ritchie Humphreys, Jon Macken, Ronnie Wallwork and Jason Euell that day. The future of English football never looked more glorious.

Of course Argentina won 2-1, thanks to goals from Aimar and Riquelme (there are ten Pies Points up for grabs for anyone who can name England’s goalscorer), with the two midfielders running rings around their agricultural English counterparts and cementing their reputations as two of the game’s more exciting prospects.

Many, many thanks to IBWM’s @DavidHartrick for doing the digging with these videos. He (and @inbedwimaradona for that matter) is well worth a follow on the old Twitter.