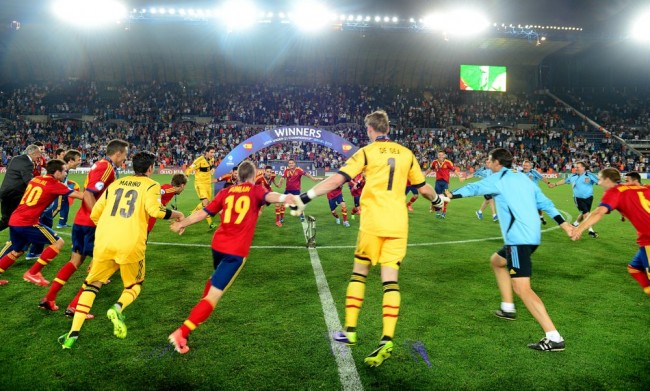 Given that they’ve been nothing short of irresistible all tournament, it was pretty much inevitable that Spain would see off Italy in the final of the European U21 Championship yesterday evening – and so it came to pass, with La Roja retaining their title courtesy of a convincing 4-2 victory.

Barcelona darling Thiago Alcantara stuck away a first-half hat-trick, with Italy’s Ciro Immobile scoring a beautiful 10th-minute dinked consolation to make the score 3-1 to Spain at half-time following a rollicking first 45 minutes, with Isco (pen) and the Azzuri’s Fabio Borini adding a further goal apiece in the second half.

By Jove these Spanish lads can play a bit! It’s not like Italy’s U21s are naff side, but they were distinctly second best from the off. Spain’s all-conquering senior legacy looks to be in safe hands for generations to come. Oh joy. Let someone else have a go chaps, it’s rude to hog all the trinkets.

Also, word on the wind is that Thiago may have a measly €18million (£15million-ish) release clause at Barca due to him not playing the required percentage of first-team games to contractually bump it up into the stratosphere last season – we can see an orderly queue forming for him this summer if that just so happens to be kosher.