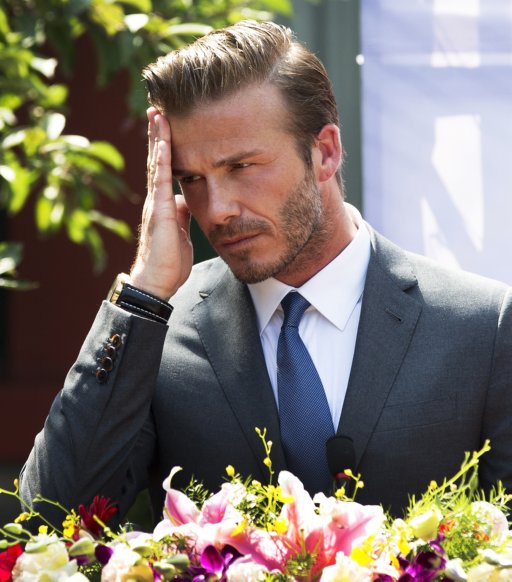 “My Golden Balls™ are tingling, people are in danger”

David Beckham™ is back in China at the moment, fulfilling his ambassadorial role with a week-long tour of the country to promote the country’s certainly-not-corruption-addled-so-don’t-even-worry-about-it domestic football league.

Day four of the tour saw Beckham™ scheduled to stop in at Shanghai Tongji University to meet and train with their football team, but word spread of his holiness’ imminent arrival and soon a thousand-strong throng of people eager for a glimpse of Becks™ swarmed the campus.

As the Telegraph has it:

“Thousands of fans and students, who had been waiting for hours in anticipation of catching a glimpse of their hero, invaded the university’s football pitch the moment he arrived.

“Those who had been left outside the gate broke through the security cordon in a stampede which resulted in at least five people being taken to hospital.”

Three police officers, two university security guards and two students were apparently injured as the event was immediately cancelled by the police, with Beckham™ left to apologise on his official Weibo (like a Chinese government-sanctioned version of Facebook) account.

“Sorry I couldn’t get out on the pitch to see the teams. It was impossible to get through the massive crowds,” he wrote, wishing his injured fans “a speedy recovery.”