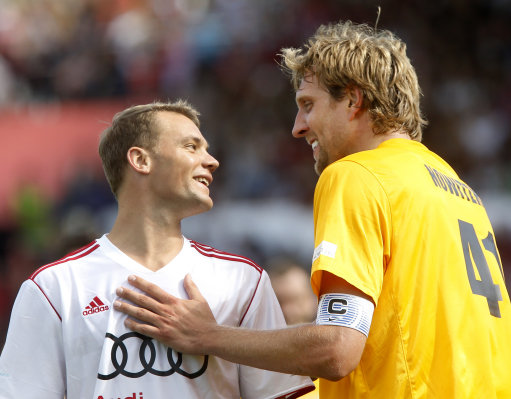 On the same day that Luis Boa Morte was busy burying a flamboyant/definitely illegal penalty for the Figo XI against Venezuelan champs Deportivo Anzoategui, over in Germany, Bayern Munich keeper Manuel Neuer and German NBA star Dirk Nowitski were joining forces in Wuerzburg to stage an exhibition game to raise money for local deprived children.

“Manuel Neuer & Friends” managed to overcome the “Dirk Nowitzki Allstars” in an 8-7 victory with Neuer scoring twice himself, though the gigantic Nowitski managed a consolation goal from the spot, having won himself a penalty with an outrageous dive in the area…

Oof. That’s an awfully long way down…and back up again for that matter. Whatever the weather, Dirk still looks ten times more graceful than Per Mertesacker in full flight.

Unfortunately we can’t find any footage of the pen, but we’re assured that Nowitski buried it past Neuer (though he later missed a second spot-kick), celebrating his goal with a lovely cuddle with Bayer Leverkusen striker Stefan Keissling… 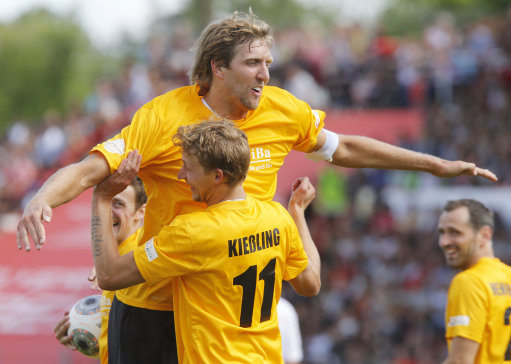