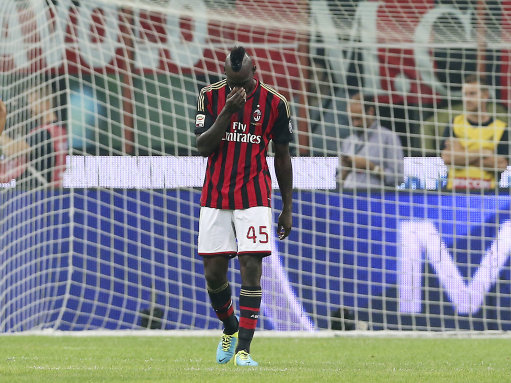 Stop all the clocks, cut off the telephone, prevent the dog from barking with a juicy bone, Mario Balotelli has missed – repeat, MISSED! – a penalty. Yes, you read that correctly.

The editor of HasBalotelliMissedAPenalty.com had their work cut out last night.

After successfully converting 26 straight penalties for both club and country (21 in official matches) since making his professional debut, Balotelli saw spot kick number 27 repelled by Napoli ‘keeper Pepe Reina at the San Siro last night as Milan lost 2-1 at home to leave them 11th in Serie A having picked up just four points from their opening four games….

That wasn’t the end of the night’s frolics for Balotelli, who went on to score a peach of a consolation goal for Milan before getting himself sent off after the final whistle, picking up a second yellow for arguing with the referee about something or other.