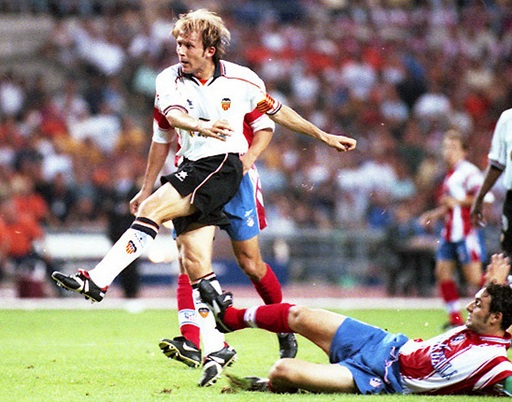 Now splitting his time between the Revista sofa and corporate DJ sets, there was a time when Gaizka Mendieta was the most sought-after player in world football.

That time came shortly after the 1999 Copa Del Rey final, when the Valencia maestro put a fitting cap on a career-high season by scoring a pearler in a comprehensive 3-0 victory over Atletico Madrid…

The best bit? Richard Swarbrick has done a version too…

As for Mendieta, following several exemplary seasons with Valencia he duly became the sixth most expensive player of all time (€48 million) when he moved to Lazio in 2001 – though cruel hindsight has shown that it was never going to be the right move for the prodigiously gifted playmaker.

He then moved to Middlesbrough (where he still has a house to this day), initially on loan from Lazio but eventually on a permanent basis, and showed English audiences glimpses of his former artisan glories in disappointingly brief spurts before being carted off to the knacker’s yard midway through 2007.

What could’ve been, eh?