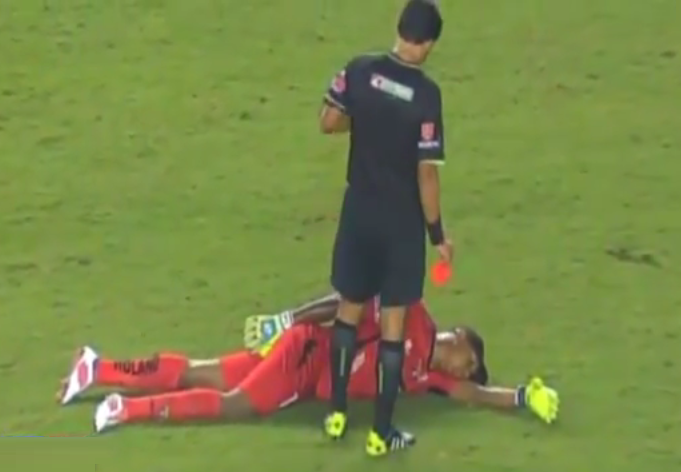 With injury time just starting and the scores locked at 1-1, Ecuadorian side Barcelona SC looked like about to sneak a draw against Colombian high-fliers Atletico Nacional in the Copa Libertadores on Thursday evening.

In order to shore up their spoils, Barca ‘keeper Maximo Banguera seized an opportunity to run down the clock with a bit of play-acting.

Indeed, Banguera went full method in pretending he’d been knocked out cold after realising he’d massively misjudged his charge-down of Ateltico forward Jonathan Copete – lying mangled and motionless on the turf for several minutes despite the only contact being his outstretched hand barely brushing Copete as the winger flew past.

Knowing a straight dismissal was on the way, the Barca stopper committed himself fully to the charade – feigning as though he’d been hit by a freight train as a stretcher cart was called for, the referee toting his red card all the while…

Eventually, the “groggy” Banguera managed to bravely make it back to his feet at which point the patient referee finally brandished his red card as the clock ticked over into the 91st minute.