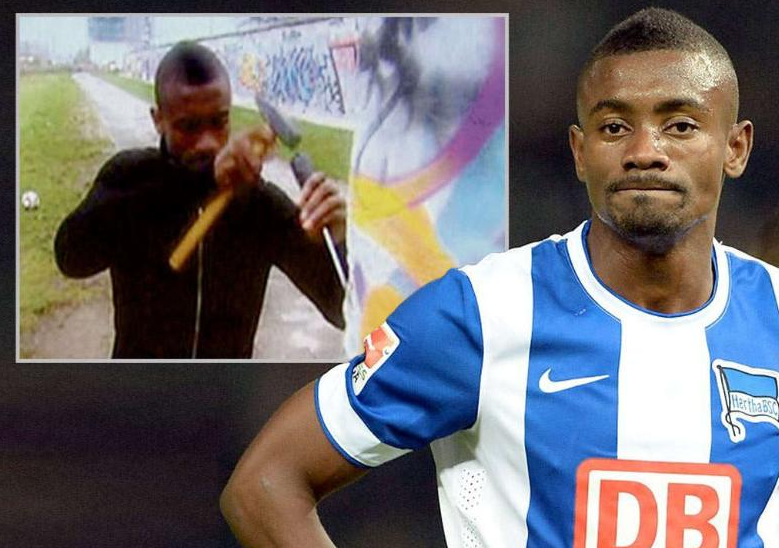 You wait years for a Hertha Berlin story and then two crop up at once. Sod’s Law.

Anyway, Hertha forward Salomon Kalou is potentially staring down the barrel of a hefty fine after being filming vandalising the Berlin Wall.

Kalou was seen chiselling off a piece of the Wall as a memento as part of a segment being filmed by a local TV station about Hertha’s 2-2 draw against Schalke on Saturday afternoon.

What with damaging the remnants of the Berlin Wall being a criminal offence and all, a chap by the name of Kani Alavi (chairman of the Eastside Gallery, a monument which includes a 1.3km-long section of the Wall) told Bild that he couldn’t believe his eyes on seeing the video.

“I nearly fell off the sofa when I saw the footage,” said Alavi.

“Here we have a well-paid celebrity increasing his market value at the expense of a national monument – without respect, and with the clear backing of television.

“Just because there is no security patrolling the Gallery, doesn’t mean you can go around doing what you want.

“If he had done that at the Brandenburg Gate, the player would probably have been arrested.”

The Wall has been under a protection order since 1991 and anyone caught vandalising it can expect to receive a maximum fine of €10,000.

Looks like that shard of crumbling concrete on Kalou’s bedside table is going to turn out to be one expensive souvenir.

May we suggest going for a snow globe or a fridge magnet next time?