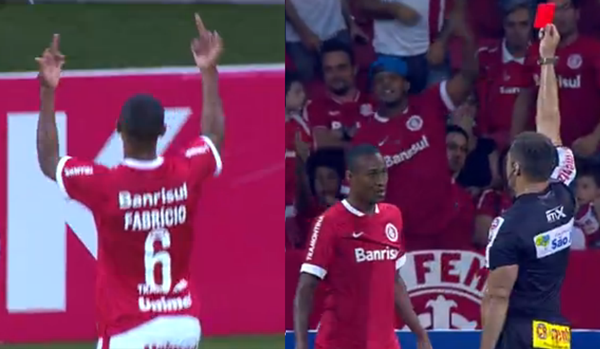 Internacional just about managed to see of Ypiranga FC in the Campeonato Gaucho on Wednesday night, despite playing for most of the evening with nine men on the field.

Firstly, former Manchester United wastrel Anderson was sent-off four minutes before half-time for scuffling with Ypiranga winger Otacilio Neto – who was also dismissed for his retaliation.

Inter were then duly relieved of another player on the hour mark when defender Fabricio found the relentless booing from the home fans too much to bear and duly went into meltdown.

Firstly, Fabricio stopped playing to give the home fans the double-barrel middle finger salute only to turn round and be greeted by the referee brandishing his red card.

Apparently, club president Vitorio Piffero was incensed that the 28-year-old chucked his “sacred” Inter jersey on the floor.

As such, Inter have already announced that Fabricio has been suspended him until end of the week while they work out what to do with him.