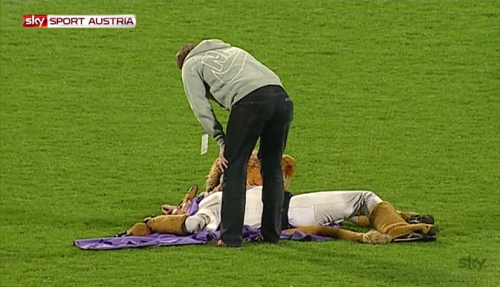 You wait ages for a craptastic mascot and then two turn up at once!

Following hot on the lettuce-y heels of Javier Zanetti’s nightmarish vegetable friend comes the cautionary tale of Super Leo, the Austria Vienna lion mascot who took his 42nd birthday celebrations just that little bit too far at the weekend.

Having begun drinking well before kick-off, by the time Austria Vienna’s 2-1 victory over Wiener Neustadt was over, Super Leo was – pardon the pun – absolutely f**king roaring pissed!

Sensing his moment, the sweaty lion removed his head and went charging out from the touchlines, lolloping and yawing as he went before eventually collapsing in a motionless heap in the middle of the pitch.

The club medical staff then gathered and attempted to move Leo, but he was so drunk he didn’t know if it was arsehole or breakfast…

Remember kids: Never drink and mascot. Not even once.