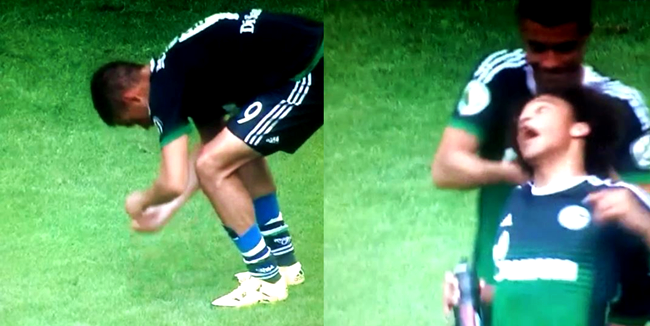 Heralded as one of the New Maradonas at one point during a particularly low ebb in football’s history, Franco Di Santo is currently plying his trade in the Bundesliga these days, having ditched Werder Bremen to sign for rivals Schalke over the summer.

Di Santo made his Schalke debut at the weekend, scoring in the 5-0 DFB Pokal drubbing of Duisburg before being taken off after an hour – though it was after the final whistle that the Argentinian striker provided the afternoon’s real highlight.

As the players were milling around on the pitch, Di Santo spotted a spider on the turf, scooped it up and promptly tipped it down the back of teammate Leroy Sane’s shirt.

To be fair, Sane just about managed to style it out…

What? Screaming like a little girl while tearing your clothes off in blind panic is still a style, is it not?