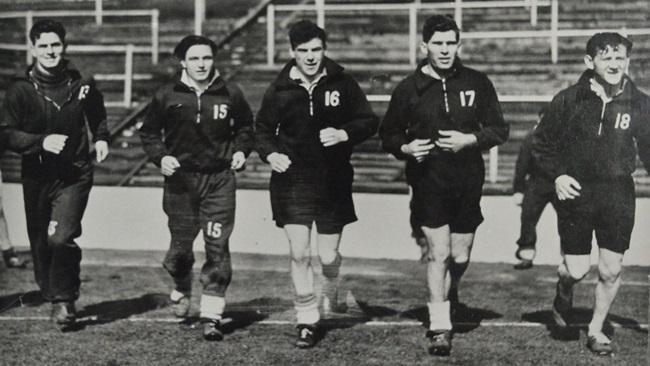 Before tiki-taka, before totaal voetbal, before push ‘n’ run, before catenaccio, before joga bonito, there was the Hibernian Famous Five.

Gordon Smith, Bobby Johnstone, Lawrie Reilly, Eddie Turnbull and Willie Ormond rose to prominence as a five-man forward line during Hibs’ post-war glory years in the 1950s, when the Edinburgh club were the main challengers to Glasgow Rangers.

The quintet deployed a form of proto-total football, interchanging positions at will.

First unleashed as a unit in October 1949, the five scored 28 of Hibs’ 31 goals during a 12-game unbeaten run that took them to the turn of the year.

The myth quickly grew that, when the five played, Hibs did not lose. That wasn’t strictly true, but things were certainly more entertaining when the Famous Five played together.

In all, Smith, Johnstone, Reilly, Turnbull and Ormond made 187 appearances together. Sadly all things must pass, and on 29th January 1955 at Easter Road against Clyde, they made their final appearance as a full ensemble.

It was truly the end of a magnificent era.