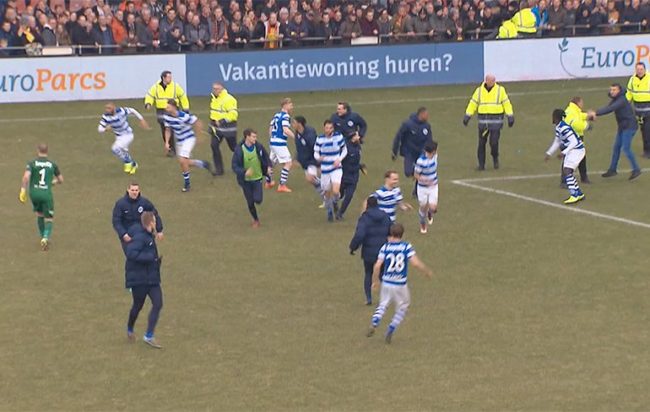 De Graafschapp secured an impressive 4-0 win away to Go Ahead Eagles in the Dutch second-tier in Sunday.

However, the fixture will be remembered less for the scoreline and more for the horrendous behaviour of the home fans, who staged a post-match pitch invasion and attacked the visiting players and stewards.

The utter madness occurred when the De Graafschapp players celebrated in front of the visiting fans after the final whistle.

A number of home fans decided they weren’t having it and jumped onto the pitch before chasing the De Graafschapp players across the pitch.

What followed was sheer madness, with the visiting players even managing to deal out a few self-preserving kicks themselves.

Watch out for the lads at the end. Less ‘hardcore hooliganism’, more ‘Three Stooges’.

No doubt Go Ahead Eagles will now find themselves on the wrong end of a very harsh ticking off from the Dutch authorities.