France and Germany played out a rather dreary goalless draw in their maiden UEFA Nations League meeting on Thursday, though poor old Benjamin Pavard ended the evening with a little something to remember the encounter by.

With less than three minutes played, Pavard was unfortunate to get caught beneath Antonio Rudiger’s studs as he slid in to block a potential cross.

While it’s difficult to judge whether there was any malice on Rudiger’s part, it didn’t stop the young French defender from suffering a really nasty scrawked gash on his neck and chest…

As bad as the official match photos are, the wound looked even more like the result of a vicious Velociraptor attack when shown close-up on television a little later in the game… 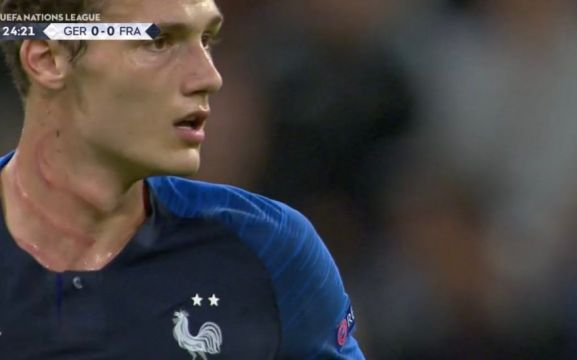 Ouch. Might want to get some Savlon on that one, Benji.