Milan dismantled city rivals Inter Milan in the Derby della Madonnina on Saturday evening, winning 3-0 thanks to a couple of goals from a small Brazilian duck and a late penalty from Antonio Cassano.

As you’d probably expect, the game was pebble-dashed with contentious issues including a huge and wonderfully rendered Judas Iscariot/Leonardo banner (hopefully we’ll have a photo up later today) being unfurled by the Milan supporters, some choice Mark van Bommel shin-crackers and a laser pen attack on Inter playmaker Wesley Sneijder as he prepared to let a set-piece fly…

Yes, this new wave of laser-wielding numpties need their fingers snapping off at the knuckle, but no Wesley, that utterly woeful free-kick was no-one’s fault but your own.

UPDATE: We’ve managed to source a shot of the Milan supporters’ rather epic Judas banner… 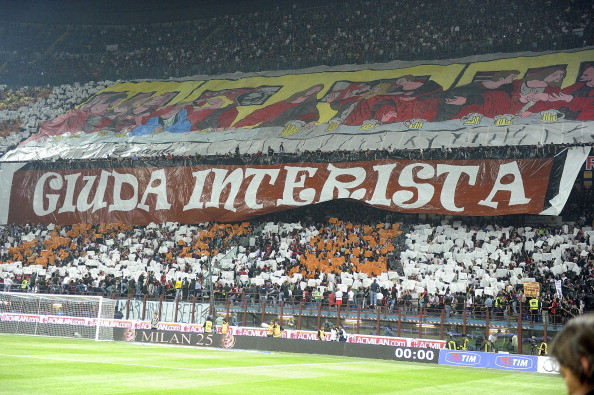 A bit harsh perhaps, especially considering that Leonardo was routinely harried by owner Silvio Berlusconi during his one season at the Rossonerri, but you’ve got to admire the sheer dedication (and man-hours) that obviously went into producing such a huge statement of retrospective discontent!