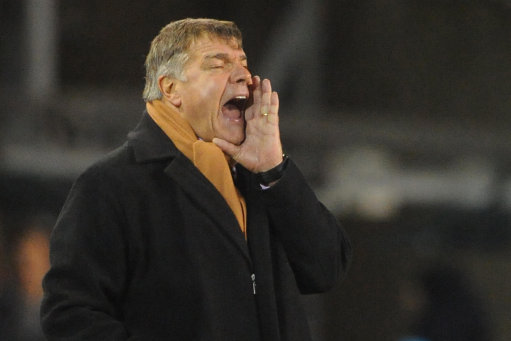 Never one to hide his light under a bushel, West Ham boss Sam Allardyce has eased Hammers fans fears by reiterating that, despite being linked to the England job (a tiny bit), he is still fully focused on his job at Upton Park. Phew.

The great exponent of the beautiful game said:

“My focus is West Ham United. We’re top of the league and we want to move forward and clinch promotion. My thoughts are not on the England job at the moment, they are on West Ham. What we hope for is that it gets resolved as soon as possible.”

There is little doubt that Allardyce sincerely believes that he would succeed with the Three Lions, after all, a few years back, he did say this:

“I’m not suited to Bolton or Blackburn, I would be more suited to Inter or Real Madrid. It wouldn’t be a problem to me to go and manage those clubs because I would win the double or the league every time. Give me Manchester United or Chelsea and I would do the same, it wouldn’t be a problem. It’s not where I’m suited to, it’s just where I’ve been for most of the time.

“It’s not a problem to take me into the higher reaches of the Champions League or Premier League and (it) would make my job a lot easier in winning it.”

Is he the man for the job?

Note to The FA: Forget all this foreign rubbish about keeping the ball on the deck, get Big Sam in, stick Crouchie up front, get the ball out wide and then straight into the box. Bob’s your uncle. Job done. EURO 2012 will be ours.