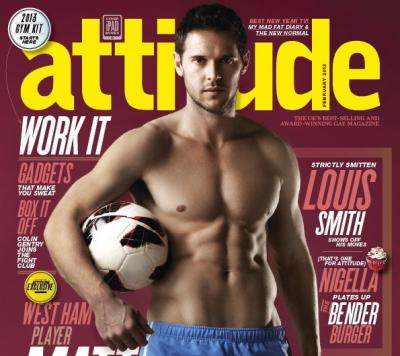 Following in the chiseled, greased-up footsteps of David Beckham and Freddie Ljungberg, West Ham winger Matt Jarvis has become the third footballer to pose for the cover of Attitude – the UK’s most prominent gay magazine – doing his bit to help challenge football’s silliest ‘taboo’.

“I’m sure there are many footballers who are gay, but when they decide to actually come out and say it, it is a different story. It’s one that I’m sure they’ve thought about many times. But it’s a hard thing for them to do.

“There’d be support everywhere within the football community, whether it be players, fans or within the PFA. There would definitely be groups of people who would be supportive and help them through it.

“You’ve always got something you’re worried about at the back of your mind. If you can let that go and then just concentrate on your one goal, which is whichever sport you’re doing to the best of your ability, I think that would help. Definitely.”

As we’ve said before, players shouldn’t feel pressured into coming out as no-one should be forced into disclosing something as personal as their sexual preference, regardless of their line of work – though good on Matty Jarvis for making a small step in the right direction.