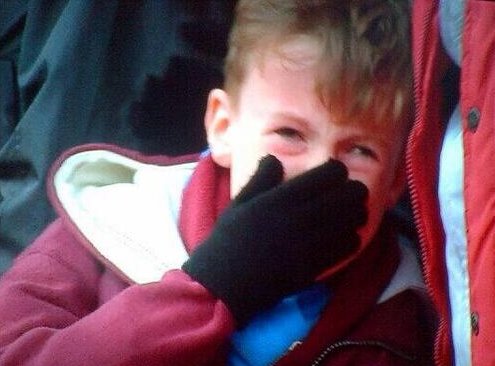 “Why is Stewart Downing captain, Daddy?”

By way of apology for their sorry performance, West Ham have offered complimentary VIP match tickets to the poor young fan who was filmed sobbing softly into his father’s gilet as he tearfully watched his side idle their way to a 5-0 trouncing against Nottingham Forest in the FA Cup on Sunday afternoon.

The Hammers have put out a plea on their official website for the little fan to identify himself, adding:

“To show the Club’s appreciation for the travelling Claret and Blue army, the Board, manager and captain would like to offer this young fan and his family a chance to watch an upcoming fixture at the Boleyn Ground from the Directors’ Box.”

Can’t help but feel that offering free West Ham tickets to the poor mite is a little akin to offering a free car to a man that lost all four limbs in a road traffic accident, but hey-ho.