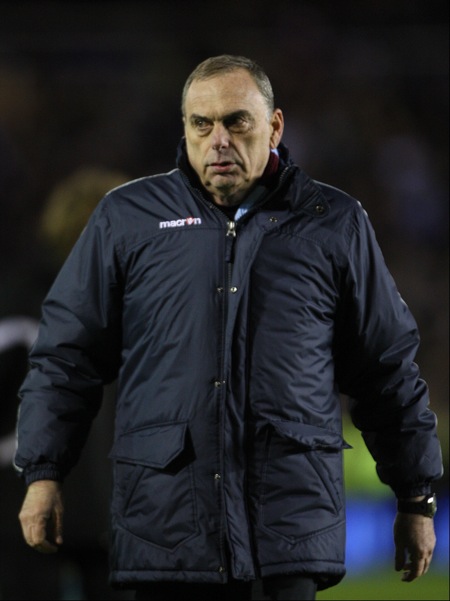 So Uncle Avram has indeed been winging it in English football all this time. West Ham’s abject capitulation at St Andrews last night confirmed what many of has had long-suspected: Grant doesn’t know what he’s doing and admitted as much after the match, saying “I didn’t know what to say to them at half-time.”

Er, but that’s sort of THE ESSENCE of your job, Avram. I understand the point you’re making – we were ahead and playing well – but half-time is undoubtedly when a manager earns his keep.

Neither did Grant appear to know how to instruct his players to deal with the very limited Nikola Zigic. The giant Serb is a poor footballer but West Ham’s back four made him look like Van Basten.

Grant is a charming man with a lot of dignity but he does not have the authority or the expertise to make his own mark on a football team. He lucked into the Chelsea job, as we know, ‘leading’ a team that was led not from the touchline anyway but by three senior players (Terry, Lampard and Drogba). At Stamford Bridge his big achievement was in just letting the players get on with it, essentially happy to be a yes man.

At Portsmouth he had nothing to lose. A fine FA Cup run partly papered over the cracks, but Pompey went down, though it would be very harsh to blame their plight directly on Grant; a nine-point penalty for going into adminstration was the final straw for the south-coast club. Again though, there was little sense during Grant’s spell at Pompey of a manager exerting his will.

Now, at West Ham, Grant continues to underwhelm with his hands-off management style – what does he do exactly? What type of football does he believe in? The Irons lie bottom of the Premier League and there is no trip to Wembley to paper over the cracks – for the majority of West Ham fans, who have had enough of the Israeli, missing out on a Wembley day out will be a blessing only if the loss leads to Grant’s dismissal. Whatever happens now, and relegation looks likely, Gold & Sullivan’s endorsement of their manager now looks foolish and premature.

You can only surf a wave for so long. Come in Avram, your time is up.