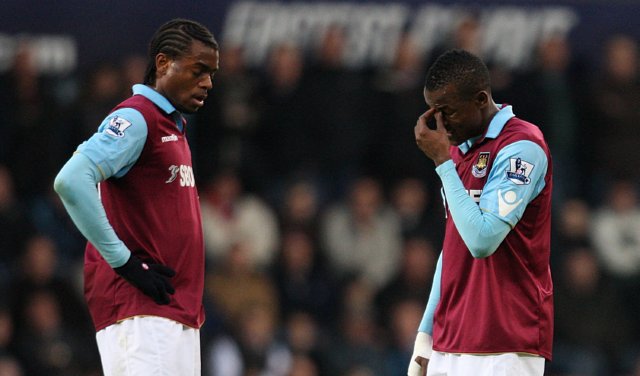 “I’m getting too old for this shit”

Just as the FA once again saw an attempt to sound the bugle of reform with yet another limp-wristed ‘Respect’ campaign immediately bludgeoned into submission by Wayne Rooney’s sweary antics at Upton Park yesterday, the news has just broken that West Ham are now staring down the barrel of a racism probe after allegations made in a newspaper report this morning.

The Evening Standard are claiming that members of both Victor Obinna and Frederic Piquionne’s family were abused by Hammers fans whilst they sat in the corporate box watching Saturday’s game against Manchester United, with the club since vowing to launch an investigation into the allegations.

“West Ham United are investigating the events around Saturday’s match against Manchester United after allegations of racist abuse.

“The club takes such matters seriously and, with the police, is reviewing CCTV footage and gathering witness information. Anyone found responsible will be dealt with appropriately.

“This is an isolated incident and our supporters, like the club, are proud of the positive relationship with Kick It Out – holding the Racial Equality Standard – and Show Racism the Red Card. “