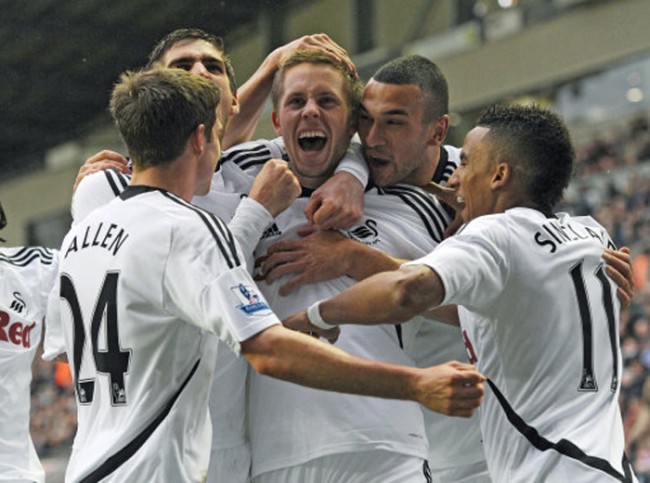 A superb brace from on-loan Icelandic midfielder Gylfi Sigurdsson hammered another nail into Wigan’s relegation coffin on Saturday at the DW Stadium, as the home side stumbled to yet another damaging defeat.

Wigan struggled to get going in the first-half, and rarely threatened Michel Vorm’s goal while the visitors looked well in control for large periods of the game. However, it took until the stroke of half-time for the Swans to finally open the scoring. Midfielder Gylfi Sigurdsson has been a superb addition to Swansea’s midfield since making a loan switch from Bundesliga side Hoffenheim, and it was his fabulous 20-yard curler which gave the visitors a deserved lead at the break.

With only nine minutes of the second-half played, the Icelandic schemer was at it again, this time firing home a superb free-kick which left Ali Al-Habsi flat-footed in the Wigan goal.

The home side rallied late on and pushed for a goal, but even the sending-off of Nathan Dyer for a high-challenge on Jordi Gomez couldn’t help Roberto Martinez’s side, who look increasingly like dead certs for the drop.

Swansea, on the other hand, find themselves 11 points clear of danger and surely safe for another season in the top flight.