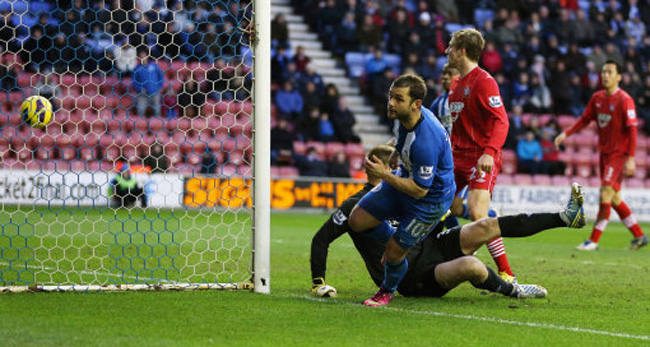 With just second remaining, Wigan were facing a potentially crucial defeat in their home clash with fellow relegation strugglers Southampton. However, with time running out, Scottish schemer Shaun Maloney popped up to resuce a precious point for the Latics.

The Saints had impressed in the first-half, with Gaston Ramirez going close, but it was the home side who would open the scoring midway through the first period, courtesy of a Gary Caldwell header.

After the break, Mauricio Pochettino’s side continued to push for a goal and were eventually rewarded when Rickie Lambert headed home a Jack Cork centre.  Adam Lallana then hit the woodwork as the visitors kept attacking before midfielder Morgan Schneiderlin, one of the league’s better performers this season, side-footed home on 85 minutes to secure what looked like a vital three points for the south-coast side.

However, at the death, Maloney turned the ball home after Paul Scharner got on the end of a corner. And that was that.

The draw sees the Saints in 16th place, three points clear of danger, while remain in the bottom three on 21 points.