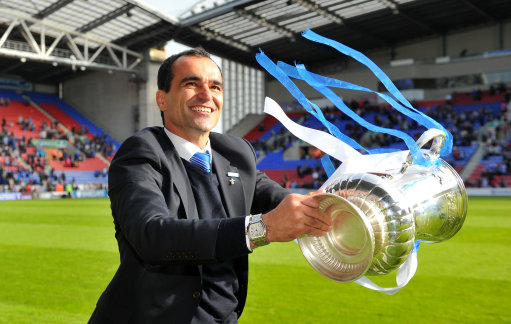 After weeks and weeks of umming and ahhing, Everton have just confirmed that Roberto Martinez has been sworn in as their new manager having signed up for four years at Goodison this afternoon.

A statement on the Everton site confirmed all the brass tacks:

“Everton Football Club is today delighted to confirm the appointment of Roberto Martinez as its next manager.

“The 39-year-old Spaniard joins from Wigan Athletic and has signed a four-year contract at Goodison Park.”

There you go. That’s the news. Dave Whelan must be sobbing into his bran flakes somewhere. First he breaks his leg in an FA Cup Final and now this.

Martinez, who both won the FA Cup and took Wigan down to the Championship last season, faces the significant task of replacing Man Utd-bound David Moyes at the Toffees – not an undertaking we’d particularity envy – as Everton fans have become used to a certain standard of consistency over the past 11 years.

You get a feeling that nothing less than bare minimum consolidation will do.