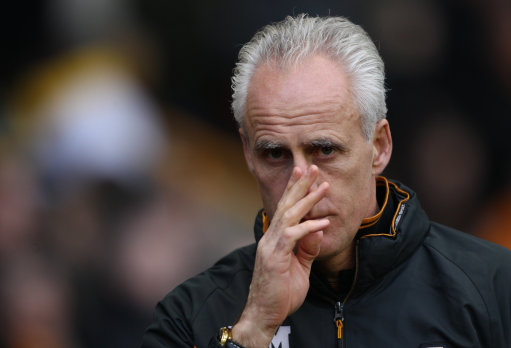 After they were well and truly trounced 5-1 at home by West Brom yesterday, a result that put them back in the bottom three, Wolves have sacked Mick McCarthy – an announcement that I actually expected to come before close of play yesterday truth be told.

The club have released the following statement:

“The board took the difficult decision [to sack McCarthy] after a run of form which has seen Wolves pick up 14 points in the last 22 league games.

“Terry Connor will take charge of team training in the interim until a new manager is appointed.

“The board would like to place on record their sincere thanks and appreciation to Mick McCarthy and he leaves with the very best wishes of everyone connected to the club.”

McCarthy has done a decent job at Wolves, but dissent has been swirling for a good while and the threat of Premier League relegation has clearly become far too real for owner Steve Morgan’s liking – especially given his side’s utter capitulation at Molineux yesterday. The news hardly comes as a surprise, put it that way. I’m sure Mick, as forthright as he is, would be the first to echo that sentiment.

So, who now? Who’s the man to keep Wolves at the top table? Steve Bruce and Lee Clark have been mentioned in passing, while you can also get pretty decent odds on Neil Warnock, Dougie Freedman, Billy Davies and Gianfranco Zola.

Any of those screaming ‘safety’ to you? Me neither. It’s just a hunch, but I fancy we may see Warnock sworn in, with McCarthy pitching up at Leeds at some point in the not-so distant future.