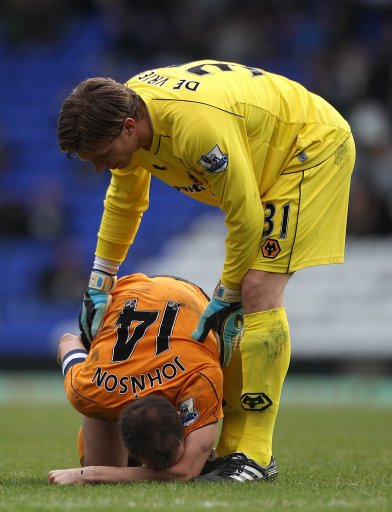 Wolves captain Roger Johnson has publically apologised after turning up to training on Monday morning ‘bleary-eyed’ and ‘under the influence of alcohol’ less than 24 hours after their humiliating 5-0 defeat against Fulham.

A £4 million summer signing, Johnson has been out of favour since Wolves were pasted 5-1 by local rivals West Brom in Mick McCarthy’s final game and was an unused substitute in the game at Craven Cottage, but reported for training with the rest of the first-string as instructed the following day – up until the point that interim manager Terry Connor was made aware of the fact that the 28-year old centre-half was hanging and duly sent him away to train with the reserv… sorry, the Elite Development Squad.

Johnson had this to say for himself:

“My conduct and approach to training on Monday was below the high standard the club rightly needs and demands from me – and what I demand from myself.

“I have apologised to the manager, my team-mates and the club.”

Wolves have since fined Johnson two week’s wages (around £50,000) and it looks highly likely that he will be excluded from the squad entirely for this weekend’s game against Blackburn.

Nice one Rodge! Sapping spirits at Molineux in more ways than one.