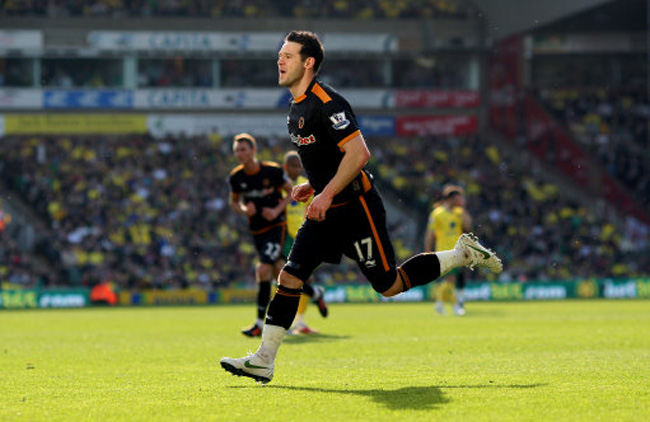 He may not look like an in-form Premier League hitman, but chunky hitman Grant Holt continues to blossom at the highest level in the land. On Saturday, the striker bagged a brace for the Canaries as they inflicted another defeat on Terry Connor’s struggling Wolves at Carrow Road.

It was the visitors who opened the scoring on 25 minutes, courtesy of Matt Jarvis, who stroked home Michael Kightly’s cross. However, that last didn’t last for long, with Holt superbly beating Wayne Hennessey just a minute later.

After that, Wolves struggled to threaten the Norwich goal and on half-time, Holt made it two, this time converting a spot-kick. The Canaries had won the penalty after Eggert Jonsson was (rather harshly) adjudged to have deliberately  handled the ball in the box from a Wes Hoolahan shot.

The visitors created little after the break, with Paul Lambert’s side defending well. Star man Grant Holt was then involved in the action again, this time receiving his marching orders for a second yellow card. But the striker had already done his bit and the Canaries coasted to a deserved victory. Wolves, on the other hand, look doomed.