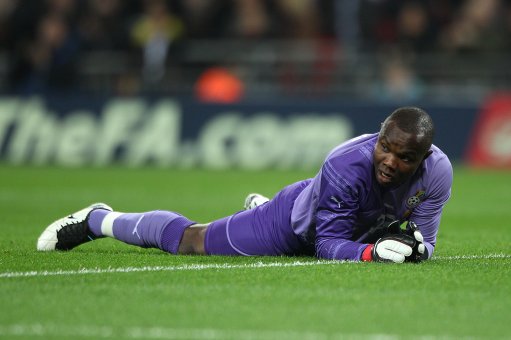 “I got confused by weighing the options of getting richer by $300,000 after that match, whereas all that I would get in the event of a Ghana victory would be much less – just $3,000.

“In the 2006 World Cup in Germany, we were about to play Czech Republic. By then they were the second best in the world.

“A Ghanaian led me to some people to take a bribe and it was [my wife] who delivered me and delivered Ghanaians. I was very confused and I didn’t know what to do but I called her and told her.

“My wife said: ‘Richard, I love you not because of your money, so don’t get tempted by this offer to lose your dignity and credibility.'”

Kingson, now 34 and back in Sweden with Hammarby, believes he has his good lady wife to thank for delivering him from evil – though this comes a week or so after the veteran ‘keeper had to take to his official Facebook account to vehemently deny that he is married to a witch.

Yep. Apparently Kingson’s wife of two years, Adelaide Tawiah, previously appeared on the same church TV channel and told the pastor/presenter that she felt responsible for the lull in Kingson’s career over the past couple of years as she cast spells on him which ‘put his career in disarray and made him impotent’.

Never a dull day in the Kingson household.