Fabio Capello must cut SEVEN players from his provisional squad of 30 by midnight on June 1st. In Capello’s shoes, which seven players would you ditch?

A reminder of the 30-man provisional squad:

I would get rid of the following baggage: 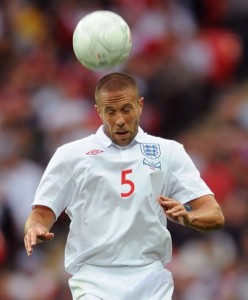 1. Matthew Upson – He had a mediocre campaign for West Ham and is prone to mistakes on the big stage. Not quite international class.

2. Stephen Warnock – The Villa player is a solid pro but Leighton Baines has had the better season and offers more cut and thrust in attack.

3. Michael Dawson – A difficult call, but we’re stuck with Carragher now (who will surely make the 23, as he can cover Glen Johnson at right-back) and out of King and Dawson, the former Tottenham man has more quality and experience. Dawson’s time will come.

4. Shaun Wright-Phillips – Not good enough, simple as that. Almost certain to miss the cut.

5. Scott Parker – Has had a terrific season, but that’s in the hustle and bustle of the Prem. I don’t think his all-action game is well suited to a World Cup finals.

6. Tom Huddlestone – Assuming Gareth Barry’s ankle holds out, we’re stuck with one of Carrick or Huddlestone. Unlike Scotty Parker, Carrick is suited to the pace of international football. Hudd is a greatly improved player this season, but I have slight doubts about his temperament and athleticism, therefore the Man Utd player gets the nod.

7. Darren Bent – Yes, he’s had a fine season but I still don’t think he’s quite good enough for England. For all his faults, Emile Heskey – the only other striker who might have missed out – is fresh and proven at international level. Plus other players seem to love playing with Heskey, which does matter.

With those players out, England’s final 23 would be:

Looks solid enough to me (and rather similar to my earlier shout).

But who would YOU cut loose?