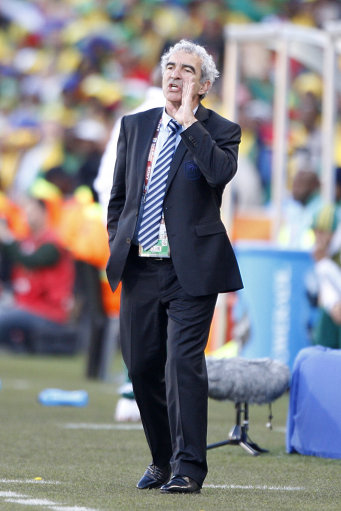 “I say, Patrice. You’re a foolhardy brat is what you bloomin’ well are!”

Dom has given his first full interview since August to L’Express and, although it isn’t due to be published until tomorrow, the French daily posted titillating snippets on their website earlier today:

“Everyone is talking instead of me. I want to restore the truth. I’m not the moron that people are describing me as.

“Let’s be clear: I got it wrong, I mustn’t have chosen the right players nor found the words that were needed.

“I do not accept the criticism of politicians, nor that of former players who have turned to journalism, but that does not prevent me from drawing my own evaluation.”

Describing the day when the remainder of the French players refused to train in protest of Nicolas Anelka’s expulsion from the squad, Domenech said:

“It was more than an hour that we had been there (at the training ground). It was really necessary that someone take responsibility and stop that charade.

“All the cameras were focused on the bus, hundreds of kids were waiting on the sidelines. We were the laughing stock of the world.”

When asked if he could pinpoint any of the mutiny’s ringleaders, Domenech replied:

“If there were any [leaders], I did not see them. Every time I went up [into the team bus], there was no one.

“At this point, I told myself that they went crazy and they didn’t realise. Now I know I was wrong, the players knew very well what they were doing.

“They even closed the curtains of the bus to hide themselves from cameras. With hindsight, I see them mainly as a bunch of foolhardy brats.”

The 59-year-old coach has been out of work since the World Cup, but he admitted that he’s had several offers since – though not in a strictly footballing sense:

“Above all, I do not want any more controversy. I have had offers for the theatre, for the cinema … nothing on TV. Honestly, how can we imagine me in a reality television show?”

Then, in true French style, Domenech summed up the whole debacle by likening to making naughty sexy times:

“I still need to brush aside certain memories before being able to start a new adventure. It’s like love: you have to have forgotten a woman to be able to love another.”

Blimey! If those are just the snippets, then the full interview should be pretty damn juicy.