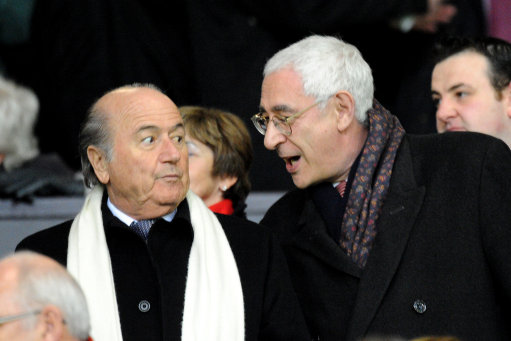 “I’ve got my eye on you, you little Swiss dumpling”

After the entire organisation threw it’s combined weight behind their incumbent presidential meatball Sepp Blatter to retain his title for another term a few days ago, you’d be excused for thinking that FIFA had no reputation left to tarnish – though, miraculously, a morning of whistleblowing has seen yet more allegations of member bribery levied at football’s governing body.

Six FIFA members are under investigation after MPs at the Culture, Media and Sport Committee in the House of Commons heard that two members (FIFA vice-president Issa Hayatou from Cameroon and Jacques Anouma from the Ivory Coast) were paid $1.5 million to endorse Qatar’s World Cup bid, but only after former FA Chairman Lord Triesman claimed that four further FIFA ExCo members (including our old friend Jack Warner) sought ‘reward’ for backing England’s unsuccessful 2018 bid.

Triesman, who was initially chairman of England’s bid before being harried out by the Mail on Sunday, has made the allegations about Warner, Nicolas Leoz, Ricardo Teixeira and Worawi Makudi – claiming the behaviour of the four men during the schmoozing and glad-handing that preceded the vote as ‘below what would be ethically acceptable’. Now there’s a thing.

Warner has since appeared on Sky Sports News to denounce Triesman’s allegations as ‘a piece of nonsense’.

The latest developments mean that no fewer than eight FIFA members, i.e, one third of the 24-man total – have either been alleged to have been or already found guilty of greedy-piggery (apologies for the tricky legal jargon) in relation to the 2018 and 2022 World Cup bids.

Question is, does that actually shock anybody? Anybody at all?