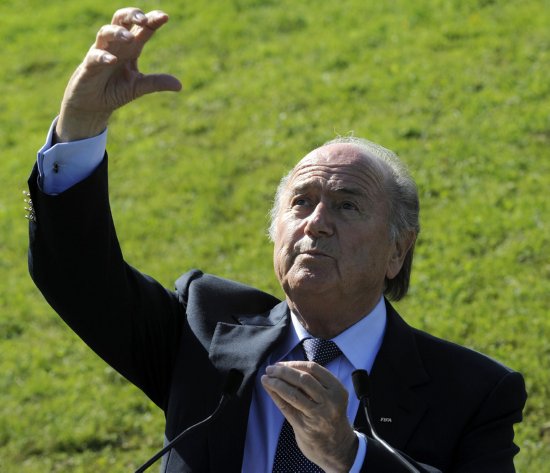 FIFA’s decision to award the 2022 World Cup hosting rights to a tiny, Sheffield-sized, almost completely disinterested, sun-scorched, oil-rich desert atoll in the middle of the Persian Gulf was a sham – you know it, I know it, Sepp Blatter knows it.

Since the Sunday Times brought to light that, shock horror, the Qatar bid team (allegedly) bribed their way to securing the tournament, there has been worldwide clamour for the vote to be recast – a proposition that Blatter has refused to rule completely out of hand.

The Swiss meatball is quoted in the Telegraph as saying:

“[FIFA] are anxiously awaiting for these evidences or non-evidences in order that we can take the adequate steps.

“We will organise and the newspaper (Sunday Times) have agreed that we will bring this whistleblower here to Zurich and then we will have an investigation of this.”

Blatter may well just be taking the diplomatic tack ahead of the imminent FIFA presidential re-election ballot (Sepp’s running against Mohamed Bin Hammam, who is from…delicious irony alert…Qatar!) but it’s good to know that the door is still slightly ajar vis-a-vis the 2022 World Cup and that there is still a sliver of hope that sense might prevail after all.

Hang on, what am I saying? This is FIFA we’re talking about here – expect the the 2022 tournament to be initially cancelled altogether then relocated to one of Saturn’s moons two days before it’s due to begin.

They should just sling the hosting rights up on Ebay a year before every tournament and have done with it.