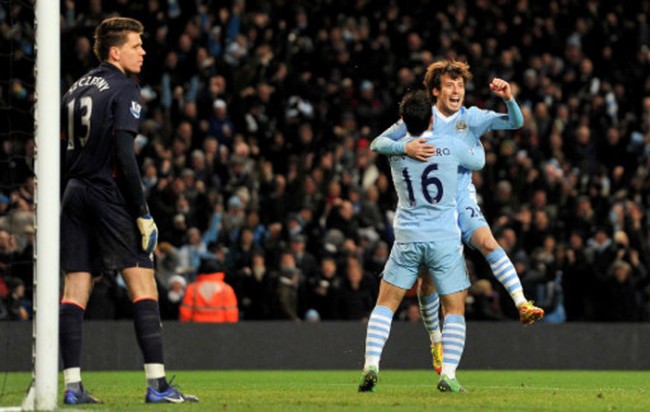 Shorn of all four full-backs in their squad, it was always going to be a difficult task facing Arsenal as they headed to the Etihad Stadium. Waiting for the north Londoners was a City side eager to get back to winning ways after last week’s defeat by Chelsea.

Sergio Aguero should have opened the scoring early on, but put his close-range effort over the bar. However, with both sides going for it, there were chances at both ends, with Gervinho and Aaron Ramsey both going close for the Gunners.

Forced to play four centre-backs across his back-line, Gunners boss Arsene Wenger then lost third-choice right-full Johan Djourou to injury, meaning another shuffle in defence, with Spanish youngster Ignasi Miquel (another centre-half) coming on in a left-back berth. Not long after that defensive re-jig, the Citizens got their goal, with David Silva prodding home after Wojciech Szczesny parried an Aguero header.

Arsenal almost hit back through Theo Walcott while City could have doubled their lead through Pablo Zabaleta. However, in the end the Citizens held on to register a deserved victory (only just) and go back to the top of the table. However, despite the result, the Gunners showed an admirable team-spirit and have now got their away trips to Old Trafford, the Etihad, White Hart Lane and Stamford Bridge all out of the way.