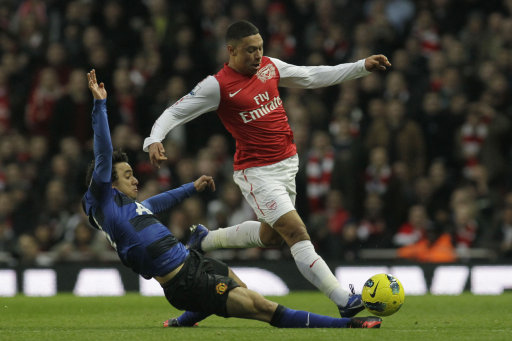 Having found himself in the middle of the Andrei Arshavin/Arsene Wenger booing controversy at the Emirates at the the weekend, teenage winger Alex Oxlade-Chamberlain has apparently now played himself into Fabio Capello’s plans for the Euro 2012 finals.

The ex-Southampton starlet was arguably Arsenal’s best player in that 2-1 defeat Man United on Sunday, and his performance obviously impressed the watching England boss, who is planning to try out the attacker in a number of friendlies ahead of next summer

Oxo-Chamberpot has been in superb form for the England U21’s, even bagging a hat-trick against Iceland last October, but is he really ready to play a role in the Three Lions’ Euro 2012 campaign? Or will it be another case of too much too soon á la Theo Walcott?