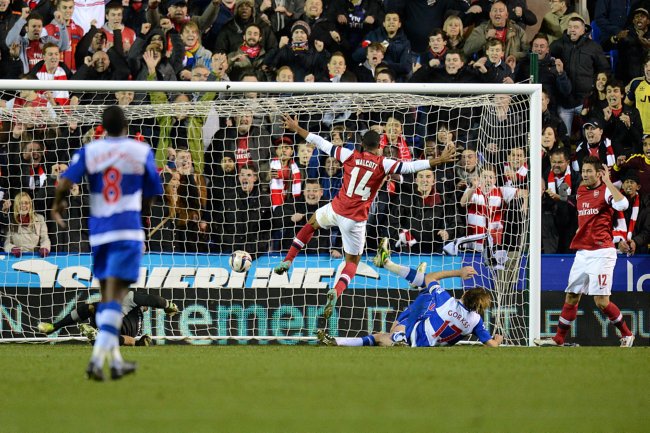 Right, basically, a second-string Arsenal side produced a performance of utter horse manure in the first half, with Laurent Kosielny returning to the shoddy form of the 2010/11 campaign. Reading, on the other hand, were fluent and more importantly, potent, so potent in fact that by the 37th minute they were all of four goals up (courtesy of Jason Roberts, a Koscielny OG, Mikele Leigertwood and Noel Hunt).

With their team in disarray on the pitch, Arsenal’s travelling support stared to sing ‘Give us our money back’ and indeed ‘Give us our Arsenal back’. Just before the break, Theo Walcott got one back for the Gunners and then, in the second half, they produced a bizarre comeback courtesy of a header from sub Olivier Giroud, an 89th min goal from the rather busy Koscielny and a last-gasp equaliser from Gooner Carl Jenkinson (although it may end up being attributed to Walcott).

With eight goals scored, and everything all square, it was time for extra-time. None other than forgotten man Marouane Chamakh then put the Gunners ahead on 103 minutes as the north Londoners looked set for victory. However, Pavel Pogrebnyak had other ideas, getting the Royals back into the game on 116 minutes. Where would it all end!! Well, with the game headed towards penalties, Walcott netted the winner before Chamakh bagged his second of the game as Arsenal killed off the game. Two goals for Chamakh? Yup, that’s how crazy this game was. And not a racist in sight!

As for poor old Brian McDermott, he can be happy with his side’s magnificent first half display. As for Arsene Wenger, Andrei Arshavin was superb and played 120 minutes, and must be edging his way back towards some regular first team action, while young German Thomas Eisfeld looks a player.