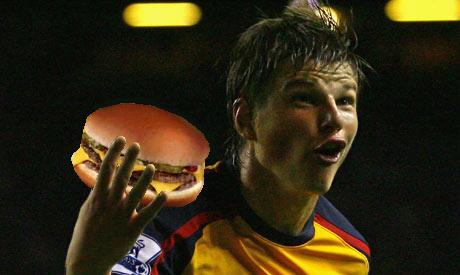 “Do you know what they call a Quarter Pounder with cheese in Russia? A ‘длсфлёцклши0-идйцдйвиоцлхфкоюфгйко9ефщгчc with cheese’!”

Big, big news is breaking this morning that Andrey Arshavin not only frequents the McDonald’s branch in Hampstead, but that he also utilises discount vouchers when eating with his family there.

Seriously, this has made several of this morning’s national newspapers!

“None of us can believe it when we see Andrey in here with his family. He’s a regular so collects the £1.99 meal deal vouchers to cut down on the total when they’re in.

“He could easily eat anywhere in town. But he says he loves the taste of our food and recognises it’s cheap for a full family.”

£75,000-a-week and still knocking pennies off with coupons? He’s definitely been playing under Wenger too long!

Perhaps Andrey could knock even more off the bill at Maccy D’s if he had a word with Scott Parker about some staff discount?