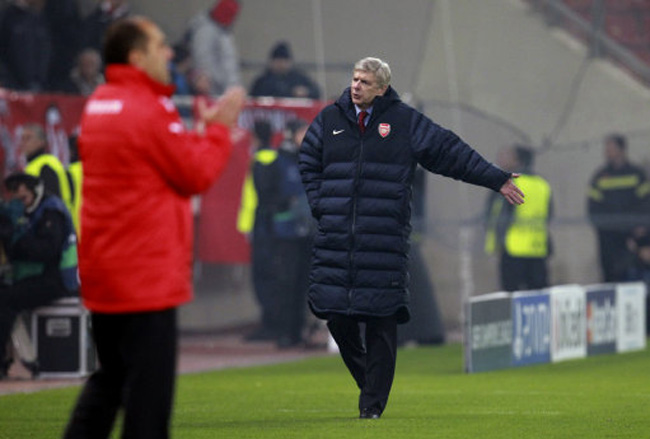 With all but of a handful of his first choice players left at home in London, Arsene Wenger watched a mix and match Arsenal side go ahead against Greek giants Olympiakos before ultimately slipping to a 2-1 defeat, a result which sees them finish second in Group B.

Tomas Rosicky, finally back from yet another long term injury, netted the opening goal in the first-half after good work from Gervinho. But after the break, the Gunners saw their lead wiped out courtesy of goals from  Giannis Maniatis and  Kostas Mitroglou. Although the first goal came after a corner that looked as though it shouldn’t have been given at all.

To be honest, only losing 2-1 despite having Sebsatian Squillaci and Marouane Chamakh on the pitch could be seen as something of an acheivement for Mr Wenger, while youngster Jernade Meade impressed in a left-back role.

A draw would probably have been a fair result, but the Gunners still make it into the last 16 yet again. And to be honest, whether they finished first or second in their group, the north Londoners would have faced a pretty impressive list of potential opponents either way.