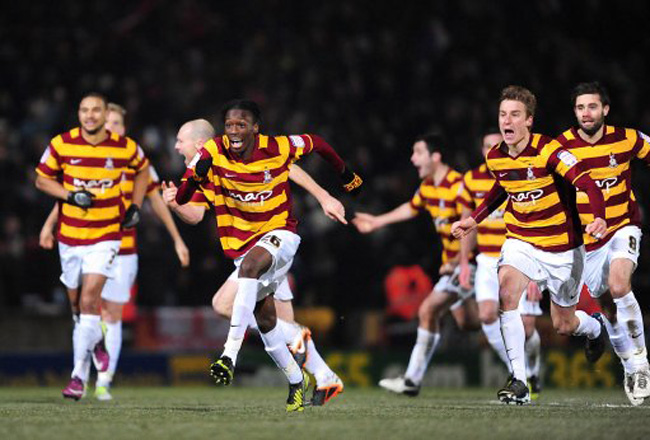 One has to wonder if this is a defining moment in Arsene Wenger’s Arsenal career. With a pretty much full-strength side on show against Division Two side Bradford, the Gunners were second-best for the vast majority of the game, before losing on penalties after failing to convert three of their five spot-kicks.

Bradford were the better side for long periods of this quarter-final tie, and were rewarded with a goal from Garry Thompson on 16 minutes after Arsenal, in trademark style, failed to deal with a ball into the box. With the superb Nahki Wells a constant thorn in the side of Thomas Vermaelen and Per Mertesacker.

Up front for Arsenal, Lukas Podolski failed to make much of an impact while Gervinho was his usual sloppy self. However, the Gunners did improve after the break, with Jack Wilshere driving his side forwards and eventually the goal came, when Vermaelen headed home at the death.

The Gunners failed to find a winner in extra-time and so the game was decided by the dreaded penalty shoot-out. Santi Cazorla and Marouane Chamakh had already missed for the Gunners when Vermaelen stepped up with his side’s fifth penalty, which he needed to convert to keep his side in the game. Unfortunately for the north Londoners, however, his effort came back off the post and Bradford were through.

While Bradford were excellent, the fact that a near full-strength Arsenal side struggled so badly at a team in the fourth tier of English football speaks volumes about the lack of motivation, belief and spark in Wenger’s squad. Forget Arsenal’s much-discussed lack of riches, they had more than enough international class talent on show to stroll through this match. Their failure to do so will only increase the pressure on their French boss.