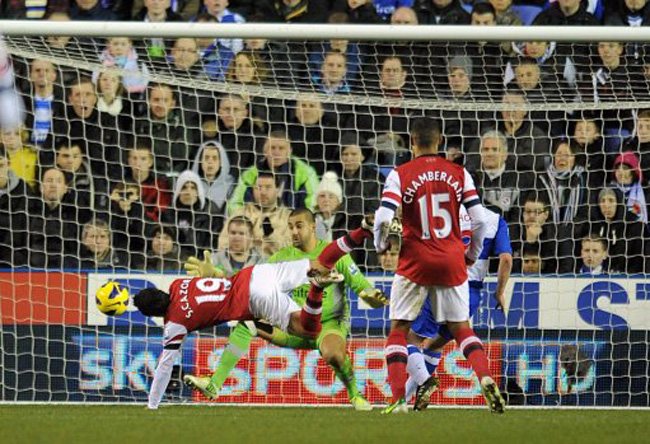 But for a shaky period in the second half in which Arsenal wobbled and shipped two goals, the Gunners were in total control of their clash with Reading at the Madejski.

With Theo Walcott given a central striking berth, flanked by Lukas Podolski and Alex Oxlade-Chamberlain, the Gunners tore Reading apart in the first-half with Santi Cazorla the undoubted star of the show.

Podolski opened scoring on 15 minutes courtesy of a fine half-volley before Cazorla netted his hat-trick, on 32, 34 and 60 mins as the Gunners ran riot.

However, Reading rallied as the visitors started to get a little sloppy, with Adam  Le Fondre and then Jimmy Kebe getting the Royals a couple of goals which gave the home fans some kind of hope. However, a fine finish from Walcott late on after superb play from Cazorla again ended the contest.

Oh, rather amusingly the Arsenal fans sung “‘How shit must you be, Chamakh scored two’ to the Reading fans, a reference to the recent 7-5 Capital One Cup goalfest between the two sides. Indeed, the two clashes between the Gunners and the Royals this season at the Madejski have produced a whopping 19 goals. Now that’s entertainment!

Anyway, that result sees Arsenal jump back up to fifth, just two points off third place. Although Arsene Wenger won’t be happy with the two goals conceded. Brian McDermott, on the other hand, has seen his side pick up just nine points from 17 games, and surely relegation is on the cards already.