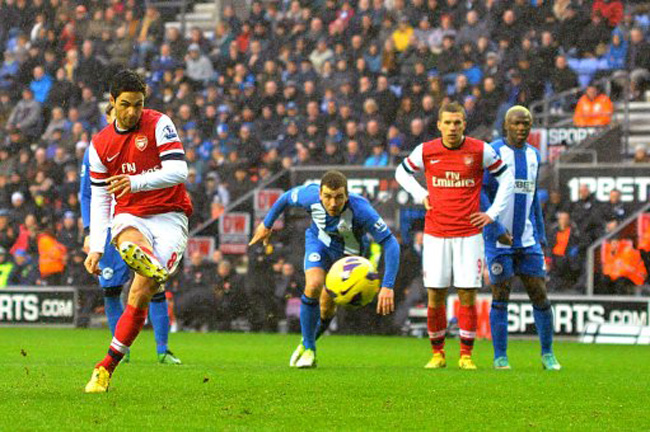 Mikel Arteta’s second-half spot-kick was enough to secure Arsenal their third win in a row at a wet DW Stadium.

Roberto Martinez started Irish schemer James McCarthy in a deep-lying libero role and the Latics kept the Gunners at bay impressively in the first-half. Indeed, it was the home side who had the best chance of the first period, when Arouna Kone outpace Per Mertesacker, only to see his effort saved by Wojcech Szczesny.

After the break, Arsenal improved, with Alex Oxlade-Chamberlain superb on the right flank. And then, on the hour-mark, Theo Walcott got in front of Jean Beausejour in the box, and went down after some contact. Spaniard Arteta converted the subsequent penalty kick and the Gunners were on their way.

Wigan did their best to level the scores, and should have had a at least one penalty when Kieran Gibbs handled the ball. However, ultimately, the Gunners stood firm to take all three points.

That result saw the Gunners, albeit temporarily move into the top three. As for Wigan, they’ll be looking for another trademark post-Christmas surge to lift them out of trouble once again.