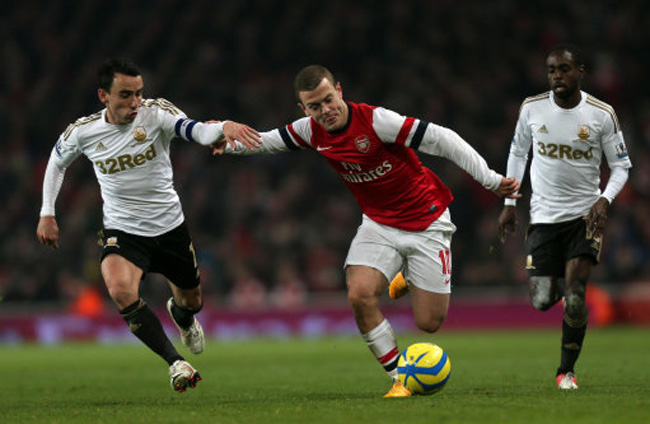 While Thomas Vermaelen may wear the captain’s armband, surely Jack Wilshere is the real heart and soul of the current Arsenal side? The midfield schemer produced an outstanding display at the Emirates on Wednesday night, as the home side deservedly overcame Swansea 1-0.

The first-half was full of pretty passing from both sides but little in the way of real goalmouth drama, although the Swans almost took the lead at the end of the first period, only for former Gunner  Kyle Bartley’s headed effort to come back off the bar.

After the break, Arsenal came out all guns blazing, with Wilshere driving his side forward from his advanced midfield role. However, despite creating chance after chance (with Giroud and Walcott the most wasteful), the Gunners failed to make their dominance count until the 86th minutes, when Wilshere fired home superbly after a clever flick from Olivier Giroud. And that was that.

Arsenal will now face a potentially tricky tie away at Brighton, although if the rest of the Arsenal squad can start to match Wilshere both in terms of passion and technique, then the future could be bright for the inconsistent north Londoners.

Swansea, on the other hand, can now focus on getting to the final of the Capital One Cup.