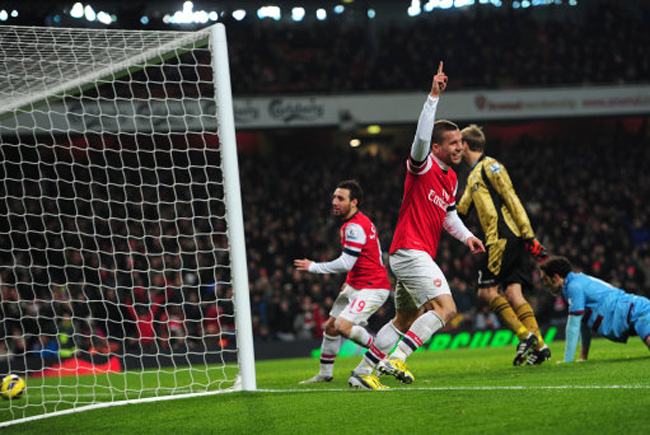 After losing to both Man City and Chelsea, Arsenal needed to back to winning ways if they were to stay in touch with the likes of Tottenham in their quest for a Champions League spot. And win they did, in some style.

To be fair, it hadn’t all gone according to plan for the Gunners from the start, with Jack Collison putting the visitors ahead on 18 minutes courtesy of a rocket shot. Although, arguably the West Ham midfielder could’ve received a red card earlier on after he went in high and not very handsome on Jack Wilshere.

It took only four minutes for Arsenal to hit back, with Lukas Podolski unleashing a magnificent drive which beat Jussi Jaaskelainen in the the Hammers’ goal.

In the second half, the Gunners tore their London rivals apart from the off, with Podolski turning provider on three occasions, Oliver Giroud bagging a brace and both Theo Walcott and Santi Cazorla (with a superb flick) also getting in on the act.

However, late on, Wets Ham sub Dan Potts suffered a terrible injury after what seemed a minor challenge. Medics attended to the unconscious starlet for over 10 minutes before he was eventually stretchered off and brought to hospital (he thankfully regained consciousness in the ambulance).

Down to 10 men, having used all their subs, West Ham did well to stop Arsenal from scoring again as the game went past it 100th minute, but ultimately it was a well-deserved win for Arsene Wenger’s men. Although, Gooners will no doubt be concerned that this hefty victory will stop Mr Wenger from strengthening the squad before the transfer window closes.