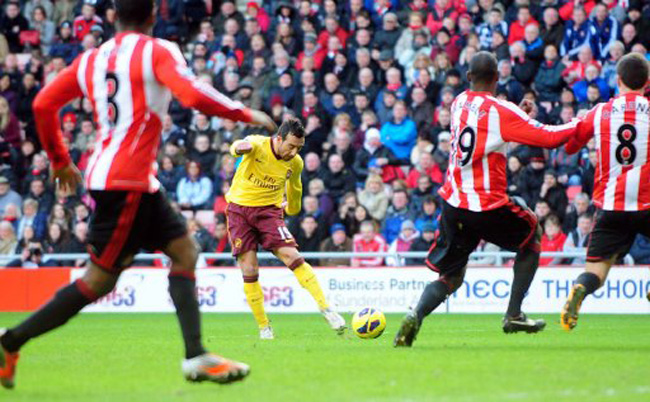 Arsenal had to endure an injury to Jack Wilshere and a red card from Carl Jenkinson but the Gunners still managed to secure a hard-fought three points at the Stadium of Light.

The Gunners were superb in the first-half and should have gone in at half-time with more than just the one goal lead (scored by Santi Cazorla).

However, early on in the second-half, injury forced man of the moment Jack Wilshere out of the action while on the hour mark, Jenkinson was rightly sent off for a second bookable offence.

The north Londoners had seen Laurent Koscielny limp out of the pre-match warm-up, with Bacary Sagna standing in the centre of defence (Thomas Vermaelen was out injured). With Jenkinson off, Aaron Ramsey took over at right-back and Arsene Wenger’s patched-up bakline was put under immense pressure by the Black Cats. Steven Fletcher, Stephane Sessegnon and Adam Johnson all came close with Wojciech Szczesny superb in the Arsenal goal.

Theo Walcott hit the post late on but the visitors, under the cosh for most of the second period, fought tooth and nail to secure the vital win, which sees them move up to fifth, four points behind Spurs.

Martin O’Neill’s Black Cats are now in 13th position in the table.