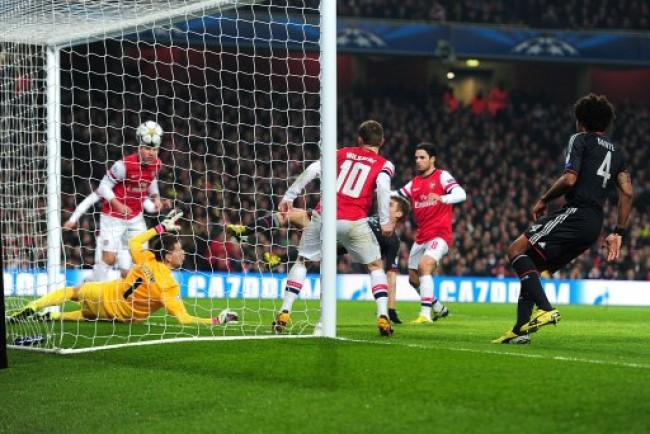 If Arsenal’s chances of finally picking up some silverware courtesy of a Champions League success were minute to start with, then after this 3-1 defeat at the Emirates, they were reduced to a molecular level.

The Gunners were outclassed for most of the game by a Bayern side playing with the confidence of a side romping away with the Bundesliga. Sloppy defending was once again the order of the day for the Gunners, with the ball finding its way far too easily for Toni Kroos to fire home.

Thomas Mueller then made it 2-0 on 21 minutes, after Daniel Van Buyten’s header was only parried into the path of the German international, who hit high into the gaping goal.

After the break, the Gunners did rally somewhat, culminating in Lukas Podolski’s close-range header. But the Germans always looked a class above and eventually rounded off proceeding with a third goal after Mario Mandzukic netted after some more less than convincing defending from the Gunners.

With the tie all but dead and buried, Arsene Wenger will now be hoping his beleaguered side can put their league campaign back on track against Aston Villa at the weekend.