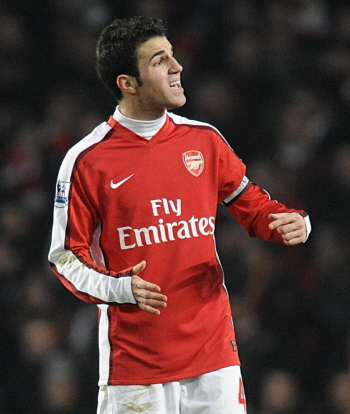 The folks over at The Sunday Mirror are reporting that Arsenal will attempt to quash any interest from Barcelona and Real Madrid by offering ‘Cesc Fabregas a bumper £30 million (£120,000-a-week) contract.

Fabregas still has three years left to run on his current deal at The Emirates but Arsenal are hoping that, by making the 22-year-old the highest-earning player in the club’s history, any potential return to Spain will be delayed until 2015 at the earliest.

In my opinion, if such a deal materialises then it would have to be regarded as the most sensible £30 million that Arsenal are ever likely to spend. If Fabregas were to leave the club, just think of the money they’d have to spend – whether by signing a stellar ‘ready-made’, or in years of youth development – to find a suitable replacement for their inspirational captain (and best player by a country mile).

What do you reckon Gooners? £30 million in return for five more years of Fabregas’ services sounds like a bargain to me!