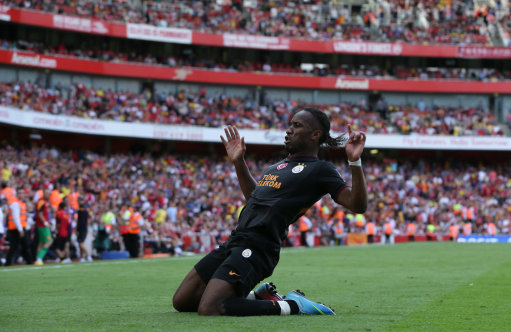 Arsenal must be well sick of the sight of their Ivorian bogeyman Didier Drogba. The former Chelsea hitman may be entering the autumn of his glittering career, but he is still a formidable front-man and on Sunday against the Gunners, he netted a brace in a superb cameo appearance.

Arsenal had taken the lead in the first-half, when a Theo Walcott cross elduded everyone in the Gala box, including ‘keeper Fernando Muslera. However, the introduction of both Drogba and Wesley Sneijder at half-time changed the game.

Drogba’s first goal came from the penalty spot after he had pulled off one of his trademark dives when defender Ignasi Miquel barely touched him. However, the second goal was superb, with the striker wrong-footing Per Mertesacker before blasting home, all after a magnificent pass from Sneijder.

The win saw Fatih Terim’s side lift the Emirates Cup while Arsene Wenger must be hoping that he never has to face the Drog again.