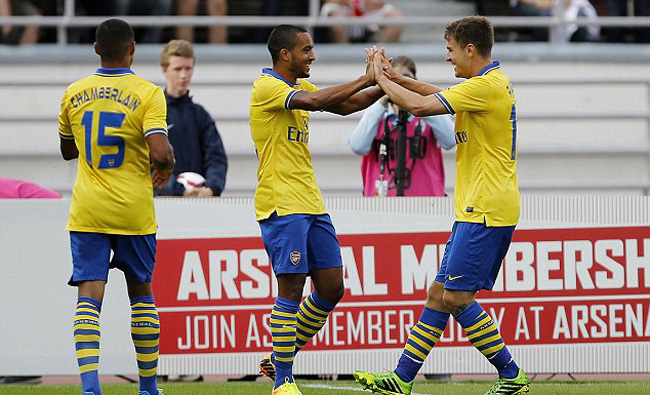 In front of a 39,000 sell-out crowd at Helsinki’s Olympic Stadium, Arsenal secured a morale-boosting 3-1 win against Manchester City in a keenly-contested friendly.

While City could show off the likes of megbucks new signings Alvaro Negredo, Fernandinho, Stevan Jovetic and Jesus Navas, Colombian trialist Sebastien Perez and young Gunner Isaac Hayden were the only new faces in the Arsenal ranks. However, with Theo Walcott in superb form, along with the impressive Aaron Ramsey, it was the Gunners who took the lead, when the Welsh midfielder supplied a superb through-ball which was deftly converted by Walcott.

In a game peppered with meaty challenges, it was the Gunners who would score next, with Ramsey finishing off a superb team move after the break (assisted by Walcott), taking the ball around Joe Hart before slotting home. Sub Olivier Giroud then made it 3-0, dinking home superbly after a fine pass from that man Walcott again.

Late on, the impressive Negredo outmuscled Laurent Koscielny to secure a consolation goal for the Citizens but ultimately it was Arsene Wenger’s men who came away with the confidence boosting win. However, Wenger will surely be aware that his side still need some top class signings if they are to challenge the likes of City for the title in the coming season.