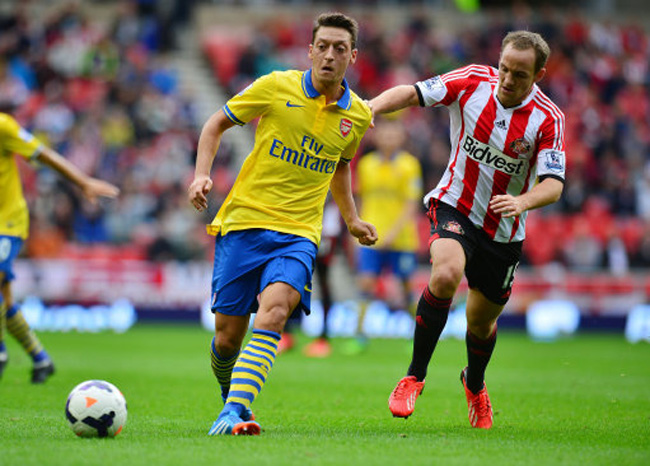 Mezut Özil enjoyed a superb debut for Arsenal on Saturday, superbly setting up Olivier Giroud for Arsenal’s first in a 3-1 win. However, it was Özil’s team-mate Arron Ramsey who would steal the show, courtesy of a match-winning second-half brace. But despite the final score, this was a game which Sunderland will feel they could well have gotten something out of, if only for some dodgy refereeing.

The Gunners started superbly and should have netted a bagful of goals, with Theo Walcott wasteful on a number of occasions. Giroud’s early goal was a classy affair but a rush of blood to the head from the striker’s fellow countryman Laurent Koscielny, who inexplicably felled Adam Johnson in the box just after the break, allowed the Black Cats back into the game, with sub Craig Gardner firing home the subsequent spot-kick.

After that goal it was all Sunderland, but it was the visitors who would score next, courtesy of a superb Aaron Ramsey volley. Soon after, the Black Cats looked to have levelled the scores again, when Jozy Altidore outmuscled Bacary Sagna before firing past Wojciech Szczesny. However, ref Martin Atkinson had already blown his whistle for Sagna’s challenge on Altidore, and so the play was brought back, with Sagna only receiving yellow for the infringement. Paulo Di Canio was. understandably, fuming and was eventually sent to the stands by the ref. To add insult to injury, Ramsey then bagged his second of the game to secure the win.

The hard-fought result sees Arsenal go top of the table, with Ramsey once again the pick of the bunch. As for the Black Cats, they’ll be hoping for a bit more luck next time out.