Though we’ve never been, Piebury Corner (@PieburyCorner), given their meat-and-pastry-based stock in trade, is an establishment very close to our hearts so it saddens us to report that the pie and mash restaurant on Holloway Road in north London was attacked by a large group of Napoli ultras around 45 minutes before Arsenal’s Champions League tie with the Italian club on Tuesday evening.

The shop is a favourite pre-match stop for many Gooners, with Piebury Corner boasting a menu that includes pie-based tributes to several Gunners legends, with the Dennis Bergkamp (chicken, ham and leek), Tony Adams (steak and ale), Thierry Henry (venison and red wine) and even a Vieira’getarian option to boot. 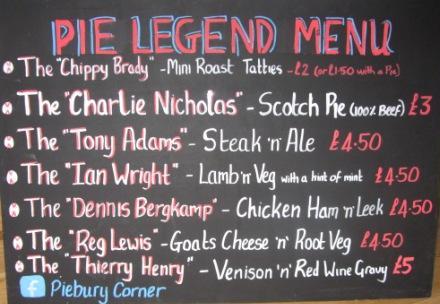 Two Arsenal fans in the shop at the time of the attack were left needing hospital treatment, with a bloke named Tim Garwood being hit over the head with a stool by one of the Napoli hoodlums and requiring a trip to A&E to have six stitches in a gash on his head and a brain scan.

Tim’s friend Richard Morey, who was also in the shop at the time, said:

“We saw a group of about 90 or 100 Napoli fans come out of Liverpool Road onto the Holloway Road.

“They were singing but then one of them ran over and punched one of the guys outside the pie and mash shop. There was a bit of a tussle out the front and then one of the windows came through.

“One of the Italian guys hit Tim over the head with a cast iron stool and left him bleeding badly.

“I have never seen anything like it – it was like going back to the early 80s. There were two kids in the shop that must have been 10 or 12 if that. It was unbelievable.”

There is a little bit of good news to end on though as, this morning, Napoli fan group Quelli dal Sangue Azzurro announced that they have vowed to raise enough funds between them to pay for the repairs to Piebury Corner and also apologised for the sub-human conduct of their fellow supporters.