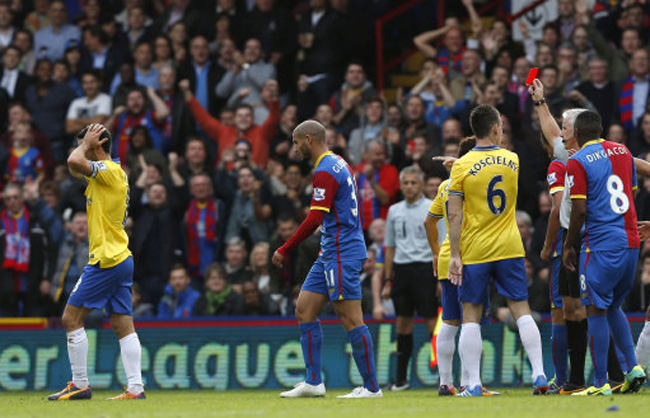 Shorn of manager Ian Holloway, Crystal Palace’s players produced a fine, energetic display against league-leaders Arsenal but ultimately, it was the Gunners who would secure a win which sees them stay atop the Premier League table.

The visitors started brightly but as the first-half wore on (and Mathieu Flamini went off injured) it was the Eagles who looked the hungrier side, bu all their good work was undone at the start of the second period, when Serge Gnabry was felled in the box by Adlene Guedioura. Mikel Arteta slotted home the resulting spot-kick but just after the hour-mark, the Spaniard was sent off after he was judged to have brought down ex-Gunner Marouane Chamakh in a last-man challenge. Arguably it was not even a foul, no matter the stopping of a clear-goalscoring chance but the Gunners battled on with 10 men.

Wojciech Szczesny was forced into two magnificent saves but at the death, Aaron Ramsey deftly set up Olivier Giroud who sealed the deal for the Gunners.

Not a great performance from Arsenal, who looked a little tired, but one which sees them remain at the top of the pile.