Here we have a group shot from Arsenal’s fancy dress Christmas party in London last night and, as you can plainly see, most if not all of the chaps went above and beyond when it came to their chosen costumes… 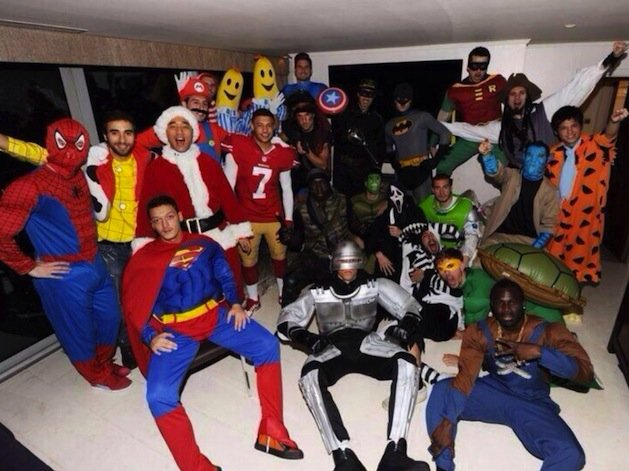 Let’s see, what do we have here? Wojciech Szczesny as Robocop, Mesut Ozil as Blue Steel-faced Superman, Lukas Podolski as The Hulk, Theo Walcott and Kieran Gibbs as Bananas In Pyjamas, Aaron Ramsey as Rambo, Nacho Monreal as a Teenage Mutant Ninja Turtle (complete with inflatable half-shell), Mathieu Flamini as Woody, Emiliano Viviano as a Na’vi, Santi Cazorla as Super Mario, Olivier Giroud as Captain America and Per Mertesacker as Jack Sparrow to name but a few.

Strangely enough, Ashley Cole also turned up (apologies, that is a Daily Mail link) despite Jose Mourinho cancelling Chelsea’s Christmas party (scheduled for the same night) in a sulk over the Blues’ surprise Capital One Cup exit to Sunderland on Tuesday. Chelsea also face Arsenal at the weekend.

Interesting timing from Mr Cole, there.